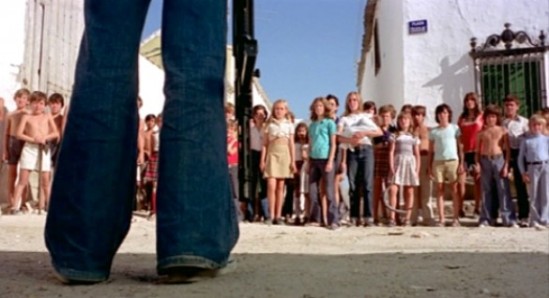 Variously titled (as 70’s European horror movies tend to be) Island of the Damned, Trapped! and Death Is Child’s Play, Who Can Kill A Child? (¿Quién Puede Matar a un Niño?) is a somewhat forgotten entry in the grand tradition of paedophobic horror. A hodgepodge of Village of the Damned, Night of the Living Dead and The Birds, Narciso Ibáñez Serrador’s 1976 film is nonetheless a tight and interesting work which retains the power to shock, though not necessarily always in a justifiable context.

Tom and Evelyn (Lewis Fiander and Prunella Ransome), a British couple on holiday, travel to the island of Almanzora off the coast of Spain, a chance to get away from the busy beaches and streets packed with crowds for the local festival. However, upon arriving, the place appears practically deserted – all the grown-ups have vanished, leaving only a smattering of children. As they explore the town in search of adult life, they discover the town has not been abandoned – the children have risen against their parents and will now stop at nothing to make sure Tom and Evelyn never leave the island alive.

What sets the evil children in Who Can Kill A Child? apart from the evil children in most other similarly-themed films is that they are not creepy moptop orphans adopted by trusting parents, or possessed with supernatural powers, or expressionless brainwashed minions. The niños here all look normal, and giggle and frolic and play, except to them it just so happens that killing has become a game. And their power is not just in their numbers, but by simply being kids, parental instinct not to harm them wins out.

Another key point is how no direct explanation is given to how and why the children of Almanzora suddenly turn. We see children ‘enlisting’ others to their cause, we learn about the moment they began their murderous activities, but there is no virus, alien incursion or diabolical force here. Rather Serrador implies that this is a metaphorical rebellion of sorts. With dead bodies turning up on the beach and wars raging in other countries and Evelyn pregnant, questions are raised whether the world is too dangerous in which to bring up children. Who can kill a child? Well, the film argues adults are responsible for the deaths of hundreds of them every day anyway.

Unfortunately, while the film proper is wise enough to keep these hints simply that, Serrador adopts a far more heavy-handed approach in the film’s opening credits – a lengthy montage of conflicts, famine and the Holocaust, complete with casualty statistics. It’s largely the same archival footage we’ve seen before, but it’s still incredibly upsetting, and attaching it to a hokey psychological thriller is emotionally manipulative, exhibiting an Uwe Boll degree of poor taste. Serrador has since suggested he wished he had included this sequence at the end of the film, but really it would have been better left removed all together (as it was on its original US release). It’s cheap, exploitative, and undermines rather than enhances what elsewhere is a strong and effective film.

A key part of its success is its setting. Horror usually resides in the shadows and darkness, so to set one largely under the oppressive Spanish sun amid bright whitewash buildings is certainly different, yet the blazing heat can be just as atmospheric as a spooky mist or fog. The location filming in and around Toledo, Menorca and Sitges (itself home to one of the world’s premier fantasy and horror film festivals) really pays off.

As for our two leads, Ransome is a likeable presence, with a grace and dignity which transcends the film’s cornier elements. And although the director originally wanted Anthony Hopkins for the role, Fiander does a good job in portraying Tom as not always the most sympathetic of characters. This may be as a result of my Anglo-centric viewpoint, or perhaps it’s actually a European comment on British tourists, but Tom is a quintessential Englishman abroad. He’s been to Almanzora before, he knows his way around, he speaks a bit of Spanish, and generally acts a little superior – in contrast to Evelyn, who’s only concerned with enjoying herself and is happy to go with the flow. So when the situation turns ugly, he takes it with a mix of stiff upper lippedness and cold rationality in an attempt to keep his own panic under wraps. His reactions and actions are not based on typical Hollywood heroics, but not having a goody-two-shoes swooping in to save the day is both unconventional and reinforces the ‘war with adults’ motif.

35 years on, Who Can Kill a Child?’ still remains a highly evocative film, owing to its simple chilling premise, undercurrent of dread, and short sharp stabs of blunt brutality. Its overwhelming and underhanded opening is frankly unforgivable and threatens to kill the film stone dead. But once you skip past that, Who Can Kill a Child? is worthy of your attention.

2 responses to “FILM REVIEW: Who Can Kill a Child?”